The Earth Sciences:
The Fossil Record Speaks For Itself

The nations have been told for decades that the fossil record supports if not “proves” the idea of evolutionary development of organisms. Transition fossils have been herald as fact throughout every conceivable form of media from TV cartoons to college textbooks.

The truth can no longer be concealed, however. Creation scientists are exposing the total myth of the existence of transition fossils. The fact is there are clearly no conclusive transitions found anywhere in the fossil record between the various taxonomic levels of animals or plants. 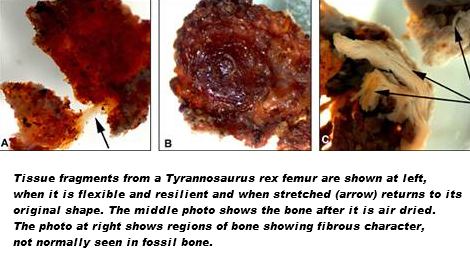 Predictions of the Evolutionary Model Have Failed

ð Read what evolutionary scientists, themselves, have to say! ï

...we have even fewer examples of evolutionary transition than we had in Darwin’s time. By this I mean that some of the classic cases of Darwinian change in the fossil record, such as the evolution of the horse in North America, have had to be discarded or modified as a result of more detailed information.
Dr. David M. Raup, Conflicts Between Darwin And Paleontology, Field Museum of Natural History Bulletin, Vol. 50(1), Jan 1979, p.22

I wrote the text of my book four years ago…. You say that I should at least `show a photo of the fossil from which each type of organism was derived.’ I will lay it on the line– there is not one such fossil for which one could make a watertight argument.
Personal letter (written 10 April 79) from Dr. Colin Patterson, senior paleontologist at the British Museum of Natural History, to Luther Sunderland as quoted in Darwin’s Enigma by L. Sunderland, Master Books, San Diego, USA, 1984, p. 89.

Evolution requires intermediate forms between species and paleontology does not provide them. The gaps must therefore be a contingent feature of the record.
David B. Kitts, Ph.D. (zoology) Paleontology And Evolutionary Theory, Evolution, Vol. 28, Sept. 1974, p. 467.

In spite of these examples, it remains true, as every paleontologists knows, that most new species, genera, and families and that nearly all new categories above the level of families appear in the record suddenly and are not led up to by known, gradual, completely continuous transitional sequences.
George Gaylord Simpson, Ph.D. (vertebrate paleontology, Museum of Comparative Zoology, Harvard University & professor of geology at University of Arizona, Tucson) in The Major Features of Evolution, Columbia University Press, New York, 1953, p. 360.

Concerning Plants:
As yet we have not been able to trace the phylogenetic history of a single group of modern plants from its beginning to the present.
Chester A. Arnold (professor of botany and curator of fossil plants, University of Michigan) in An Introduction to Paleobotany, McGraw-Hill, New York,1947, p.7.

I still think that, to the unprejudiced, the fossil record of plants is in favor of special creation.
E. J. H. Corner (professor of tropical botany, Cambridge University, UK), Evolution in Contemporary Botanical Thought , Oliver and Boyd, for the Botanical Society of Edinburgh, 1961, p. 97.